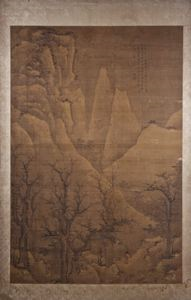 Commentary
The style and composition of this work is identical with that of the early 16th century painter Jiang Song. Many of Jiang Songâs works had their signatures and seals erased in order to sell them as Song dynasty works rather than Ming dynasty works. The inscription supposedly written by the Zhengde emperor of the Ming (r. 1506-21) does precisely this â it attributes the work to the painter Cao Zhao of the Song dynasty (11th century). âCao Zhao, whose style name was Tianqi, was from Danyang; he received the jinshi degree in the jiwei year of the Yuanfeng era (1079) and was appointed to the Secretariat-Chancellery. He was skilled in landscape and figures and especially good at doing old trees with withered branches. Today looking at the vigor of this paintingâs brush and ink, one can praise its quality of achieving satisfaction.â

Whether or not the inscription is genuine, this is a fine quality work most likely by Jiang Song and comparable with several other works in major museums.

Old number "L1780/5" written in pencil on the backing paper.
Medium
Black ink brushed onto silk, with a light grey silk brocade border.
Object Description
Mounted scroll depicting a landscape in light, fluid ink strokes, with little detail. Lighter mountains are in the background and barren trees are in the foreground, pictured at the lower edge. A lone traveller with a walking stick is pictured in the lower right of the image.
Keywords Click a term to view the records with the same keyword
This object has the following keywords:
Autumn, Mountains, Paintings, Travellers
Portfolio List Click a portfolio name to view all the objects in that portfolio
This object is a member of the following portfolios:

Your current search criteria is: Portfolio is "Mountains" and [Objects]Century is ".