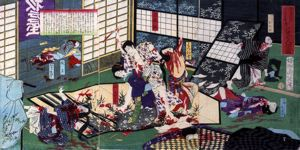 Credit Line: Purchased with funds from the Aoki Endowment for Japanese Arts and Cultures
Accession Number: 2004.1.38

Marks
Unsigned.
Medium
Colored ink on paper; diptych.
Object Description
According to the text panel, which reads like a police report, Tokunaga Bin attacked and stabbed seven people at the Sugidoya in the New Yoshiwara pleasure quarters on the 23rd day of the 7th month of 1879. A native of Fukushima Prefecture, this young man had come three days earlier to see the famous Bon Festival lights. However, while at the Sugidoya he was fighting and ran up a bill he couldn't pay. He was insulted by the prostitutes and left. Three days later about 10 in the morning he returned to the brothel with a short sword, climbed to the second floor and began attacking about noon. He started by murdering a 16 year old prostitute (shogi) and then severely injured the 30 year old performer (yarite), who are depicted in the right panel of the triptych. Next he went downstairs, killing first the manager Shigejuro and then stabbed Masakichi, husband of a performer (geisha). Hearing the disturbance, Kosakura (who was bathing) and another prostitute were greatly frightened. As they were getting out of the bath, he attacked them with all his might using the short sword, as shown in the center panel of the triptych. However, Kosakura was able to run out and notify the police, who took Tokunaga prisoner and escorted him to the local police station.

Such a gruesome scene was probably commissioned by the publisher Yamamura Kinzaburo in order to satisfy public curiosity about the multiple murders. Chikanobu's chaotic composition, with sliding wall panels falling and blood flowing, successfully captures the horror of the event, although the text suggests that the victims were in several different areas rather than in one room and its verandah, as shown here. Recreating gory sights like this were popular on the kabuki stage in the mid 19th century and in cheaply sold prints. The artists Yoshitoshi and Yoshiiku had each designed 14 single sheets for a series in 1866-1869 entitled "28 Famous Murders with Accompanying Verses" (Eimei nijuhasshuku) which recorded well known kabuki theater scenes that were loosely based on actual crimes. By the mid 1870's, though, print publishers were able to capitalize on current scandals, and newspapers such as the Yubin hochi shinbun (Postal News) commissioned artists like Yoshitoshi to provide immediate coverage of sensational events. Later between 1886-1888, Yoshitoshi designed prints based on crime reports in the Yamato shinbun (Japans News), such as one depicting the former geisha Hanai Oume killing her lover Minekichi and another showing the enraged Ginji stabbing Ofumi (44.1.40, 44.1.11).

Provenance
Purchased by Bruce Coats from Tokyo in June 2004, using Aoki funds.
Publisher
Takekawa Unokichi
Keywords Click a term to view the records with the same keyword
This object has the following keywords:
1880-1885, Death, Vice, Corruption and Vengeance
Additional Images Click an image to view a larger version