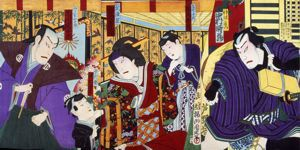 Credit Line: Purchased with funds from the Aoki Endowment for Japanese Arts and Cultures
Accession Number: 2005.1.21

Edition
Fine colors. Fine impressions with gauffage and lacquer.
Marks
Two text banners in the upper left of the right panel. Text block in the upper right of the right panel. Text printed in the lower right of the right panel. Pairs of text banners in the upper right and upper left of the center panel. Signed in the lower right of the center panel. Pairs of text banners in the upper right and center of the right edge of the left panel.
Medium
Colored ink woodblock print; oban triptych.
Object Description
This appears to be a variation of "The Bamboo Room" scene from Act II of the play "The Precious Incense and Autumn Flowers of Sendai / Meiboku Sendai hagi." In the standard kabuki play version, the shogun's son Tsuruchiyo is friends with Senmatsu, son of the wet-nurse Masaoka. In this print, names have been changed. The cartouches indicate that the boy on the right is named "Kamechiyo;" kame means "turtle" and is often linked with tsuru / "crane" as two symbols of longevity, so the kabuki audience would have recognized the name change from Tsuruchiyo to Kamechiyo. Similarly, the name cartouche for the boy at left reads Sendaimatsu:" in the standard version of the play the wet nurse's son is called Senmatsu, and the actual murder took place in the city of Sendai, so again the audience would have understood the connection. The names of adult characters on the print have also been altered, but the stage set and action clearly indicate this is a version of the famous play Meiboku Sendai hagi.

Your current search criteria is: Portfolio is "Plays and Theatre".