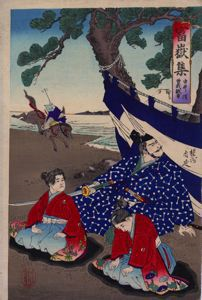 Marks
Signed: âYoshu Chikanobuâ
Medium
Colored ink woodblock print; oban tate-e.
Object Description
The Soga Brothers were historical figures whose vow of revenge has resonated in kabuki and noh theaters for centuries. Juro Sukenari (1172-1193) and Goro Tokimune (1174-1193) were the children of Kawazu Sukeyasu, an ally of the Taira clan, who was killed in 1176 by their grandfather's enemy Kudo Suketsune, a close associate of the shogun Minamoto no Yoritomo. The oldest boy swore to revenge his father's death. To prevent such a vendetta, the brothers were taken to Yui Beach where they were to be decapitated, but the executioner could not bring himself to kill the boys, the scene shown here. Later their mother married Soga Sukenobu, who adopted them; Juro was raised to be a warrior, but Goro was sent to a Buddhist temple to be a priest. As they grew older they both plotted to kill Suketsune, which they did when he was on a hunting trip on Mt. Fuji with Yoritomo.


Publisher
Kobayashi Testujiro
Keywords Click a term to view the records with the same keyword
This object has the following keywords:
1891-1912, Coastal, Horses and Camels, Soldiers and Warriors
Additional Images Click an image to view a larger version

Your current search criteria is: Portfolio is "Soldiers and Warriors" and [Objects]Display Artist is "Yoshu Chikanobu".