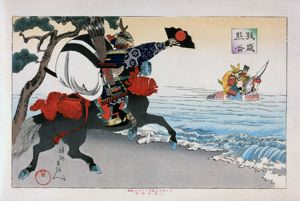 Marks
Signed: âYoshu Chikanobu hitsuâ with red toshidama seal
Medium
Colored ink woodblock print (oban yoko-e) on off-white paper.
Object Description
This popular series that illustrates the war stories of the Heike monogatari was first published in 1898-99 by Fukuda Heijiro and then reissued (in this case in 1906 by Narasawa Kenjiro). The later editions are less subtly colored, but the compositions are essentially unchanged.

The Genji troops under the command of Minamoto no Yoshitsune included Kumagai Naozane (1141-1208), a professional soldier and noted horseman. After great success in the battle at Ichi-no-tani where the Heike forces were thoroughly routed, the bloodthirsty Naozane was riding along the beach, looking for enemy to decapitate. Offshore he saw a warrior in resplendent armor heading his horse into the waves toward an escape boat filled with Heike survivors. Naozane challenged him, waving a fan and shouting, "You out there! I believe you are a great general. It is cowardly to turn your back on an enemy. Come back!" It is this tense moment that Chikanobu depicts here.

The Heike warrior Taira Atsumori (1168-1185) promptly returned to the beach but was quickly forced from his horse. The old soldier Naozane ripped off his opponent's helmet and discovered a handsome young courtier. Immediately Naozane recalled his own son Naoie and hesitated, but then said, "Though I wish to spare your life, a band of my fellow warriors is approaching, and there are so many others throughout the countryside that you have no chance of escaping from the Genji. Since you must die now, let it be by my hand rather than by the hand of another, for I will see that prayers for your better fortune in the next world are performed." With tears in his eyes, he cut off Atsumori's head, declaiming, "Nothing is so bitter as to be born into a warrior family. Were I not a warrior, I should not have such sorrow. What a cruel act this is!"

The historian Paul Varley noted, "This is the strongest statement in the Heike against the butchery of the martial profession, a statement all the more remarkable because it is delivered by a lesser warrior like Naozane, for whom battle and killing are a way of life."


Publisher
"Fukuda Hatsujiro,1898, reprinted by Narasawa Kenjiro 10 March 1906 "
Keywords Click a term to view the records with the same keyword
This object has the following keywords:
1891-1912, Soldiers and Warriors
Additional Images Click an image to view a larger version

Your current search criteria is: Portfolio is "Soldiers and Warriors" and [Objects]Display Artist is "Yoshu Chikanobu" and [Objects]Century is "19th c".