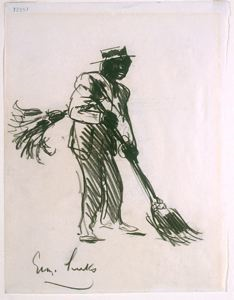 Medium
Black crayon on off-white sketchbook paper.
Object Description
Known as a real character, Luks was full of energy in life and in his painting. George Luks was a leading figure in the New York art world in the early part of the twentieth century. His lively portraits and genre paintings of everyday people were candid rather than posed.

Along with Robert Henri and others, he was a leading figure in the highly controversial group called âThe Eightâ that was a group of American painters who protested formal academic styles, which were then current. The group was popularly referred to as the âAshcan School,â because they concentrated on everyday scenes and ordinary people, the Ashcan School was a forerunner to social realist painting of the 1930âs.

Keywords Click a term to view the records with the same keyword
This object has the following keywords:
Drawings and Pastels, Males, Modern 20th century, Workers
Portfolio List Click a portfolio name to view all the objects in that portfolio
This object is a member of the following portfolios: