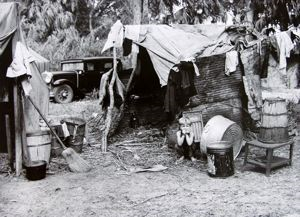 Commentary
The Swiss photographer Robert Frank (b. 1924) wrote, âThere is one thing the photograph must contain: the humanity of the momentâ.1 Marion Post Wolcottâs powerful photography from the Great Depression embodies this quality. From 1938 to 1941, the New Jersey-born artist documented scenes of rural America for the Farm Security Administration (FSA), a New Deal organization charged with restructuring small farming practices. Her background significantly impacted her photographic aesthetic and political views. She was raised in part by the Hurds, an African-American family, and her independent and unconventional mother had worked for Margaret Sanger (1879â1966), the founder of Planned Parenthood. As a young woman, Post Wolcott studied dance and psychology in Berlin and taught at progressive schools on the East Coast before moving to New York, where she began work as a freelance photographer and joined the New York Photo League, an influential organization known for its social activism. Her exposure to fresh artistic ideas and the downtrodden elements of society greatly shaped her reformist worldview, which is embedded in the quiet power of her images. In 1938, Farm Security Administration (FSA) photography program director Roy Stryker (1893â1975), hired Post Wolcott as a staff photographer, a challenging position that required Post Wolcott to document the poverty of small farmers and adhere to a list of rough scenarios. She entered into a group of road-tested FSA photographers that included Ben Shahn (1898â1969), Walker Evans (1903â1975), and Dorothea Lange (1895â1965). Child in doorway of shack of migrant pickers, an image taken in 1939 near Belle Glade, Florida, epitomizes the desolation evident in many of Post Wolcottâs photographs. Surrounded by signifiers of his familyâs poverty, a boy hugs himself against the cold. Despite the jumble of objects in the background, the boyâs desperate expression stands out, indicating Post Wolcottâs compositional skill. She captures both the poverty and the dignity of her young subject. Jennie Waldow â12
1Frank, Robert. "Black and White Are the Colors of Photography." Aperture, 9(1), 1961; New York: Aperture Foundation. Print.

Marks
Signed on verso.
Portfolio List Click a portfolio name to view all the objects in that portfolio
This object is a member of the following portfolios:

Your current search criteria is: Related to "Marion Post Wolcott".