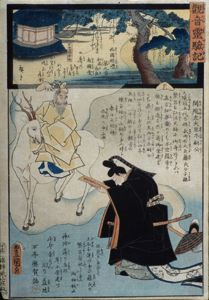 Credit Line: Purchased with funds from the Aoki Endowment for Japanese Arts and Cultures
Accession Number: 2001.2.14

Commentary
Kasuga is the deity worshiped at the Kasuga Great Shrine in the ancient capital of Nara. Since about the 8th century, he has been considered the protective deity of Nara and of the powerful Fujiwara clan â many of whom were members of the imperial line. He is shown here as an elderly nobleman riding a white deer looking at a nobleman in black, probably a member of the Fujiwara clan, who bows before him making an offering of what appears to be a sacred text. Even today, deerâonce believed to be the sacred messengers of the deityâroam freely in and around the Kasuga Shrine grounds.


Marks
There are two seals in the lower right, and one in the upper right. Signed Toyokuni and Hiroshige.
Medium
Color woodblock print; ink on paper; oban tate-e.
Object Description
Edo period color woodblock print, depicting a Heian priest bowing before the vision of a deity riding a white deer. The priest is a Fujiwara family member, and he is paying homage to the Kasuga Shrine deity. The upper scene shows the west hall at Kofuku-ji.

Kannon Reigen Ki
2021.1.9
Portfolio List Click a portfolio name to view all the objects in that portfolio
This object is a member of the following portfolios:

Your current search criteria is: Related to "Utagawa Kunisada II".