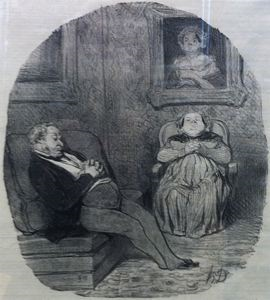 Commentary
Daumierâs signature dry wit shines through this cartoon. Franceâs most popular caricaturist throughout much of the 19th century, Daumierâs favorite subjects were most often political figures or the lives of his fellow Frenchmen. Well known in his life for his drawings in newspapers of current events and daily life, Daumier captured a middle-aged couple reclining in their sitting room in this lithograph. He entitled it, âHow a conversation between married people ends after dinner.â Daumierâs use of the word conjugale suggests a slightly bawdy play upon the word, as he keenly observes the changes in a relationship after several decades of married life.


Marks
Center, top: "Les Bons Bourgeois"
Top, right: 'No. 22"
The print bears the artist's signature: "h.D." in the lower right.
Lower left, outside of the image: "Imp. d'Aubert & Cie."
Lower right, outside of the image: "Chez Aubert Pl. de la Bourse."
Keywords Click a term to view the records with the same keyword
This object has the following keywords:
Domestic Scenes, Western Works on Paper
Portfolio List Click a portfolio name to view all the objects in that portfolio
This object is a member of the following portfolios:

Your current search criteria is: Related to "HonorÃ© Victorin Daumier".