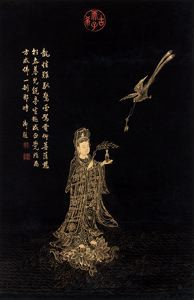 Commentary
Inscription: A dragon nature [a stubborn nature] is difficult to tame; shocking thunderclaps and flying lightning bolts, I look up at the bodhisattvaâs compassion. In the morning I worship, in the evening I discern [the truth] and the certain destiny of the next life. Attaining the source of enlightenment, in the Southern Pure Land [one] becomes a buddha in an instant. Inscribed by the imperial hand.
Professor Kathleen M. Ryor, Carleton College

This 18th-century Chinese painting in gold ink on indigo-blue paper depicts the Buddhist deity Guanyin receiving an offering of beads from a parrot. The image is based on an ancient Chinese Buddhist tale of a parrot who was devastated at the loss of its parent, to whom he was very devoted. The compassionate bodhisattva Guanyin saw the parrot's devotion and decided to relieve the bird of its suffering. As an act of gratitude, the parrot became a disciple of Guanyin and offered the deity a string of beads.

Marks
The inscription is purported to be by the Emperor Qianlong (1736-1795). Question of ghostwriting for Qianlong is big and thorny. The quality of the painting and calligraphy are good; could well be authentic. A Buddhist work of the Bodhisattva Guanyin
Professor Peter Sturman, University of California, Santa Barbara


Unsigned. No artist signature. Inscript in the upper center by Emperor Qianlong (1736-1795).
Medium
Gold and paint brushed on paper, mounted with silk brocade.
Object Description
An 18th century Buddhist scroll of the Bodhisattva Guanyin, dressed in a golden robe. The goddess is lifting up an offering to a bird in the sky. The background is in ultramarine blue.
Keywords Click a term to view the records with the same keyword
This object has the following keywords:
Buddhism, Paintings, Screens and Scrolls
Portfolio List Click a portfolio name to view all the objects in that portfolio
This object is a member of the following portfolios:

Your current search criteria is: Objects is "Guanyin, Bodhisattva of Compassion".