Mirror (Round, Lion and Grapevine) 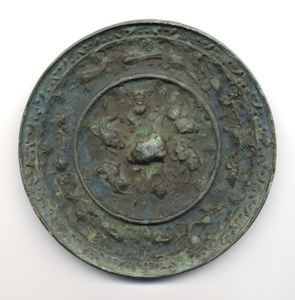 Bibliography
Ju-hsi Chou, "Circles of Reflection," exhibition catalog, The Cleveland Museum of Art, Cleveland, Ohio, 2002, p.64.
Marks
3 stickers: #12; "230"; "G230."
Medium
Cast and worked silver mirror.
Object Description
Circular silvered mirror with lion and grapevine motifs in the center, and birds and flowers in the outer ring. Crouching lion boss. The decoration is presented in three rings: the inner field has six lions arranged axially in position. The center field consists of a simple elevated rim from which nine bunches of grapes extend inward. The outer field is adorned with paired birds in flight, which alternate with single running creatures. All are viewed from the side. The mirror has a vine rinceau which extends over a slightly elevated rim into the rim field proper. The design consists of an underlying double parallel line with a floral motif covering it.

"The animal-and-grape design is a major typology. Grapes were introduced into China as early as the Han dynasty and soon appeared in textiles as a decorative motif. During the Tang period interest in this imported fruit deepened considerably and grape wine gained enormous popularity in the court and among the gentry. This interest made its way into mirror design, with the typology of animal-and-grape as its most eloquent testimonial. This mirror type itself did not last long, yet at its peak, its vitality was irrepressible and its wealth of details unprecedented." (Ju-hsi Chou 2002, 64). This seems to be an early mirror in the typology, as it is rather simple and subdued compared to others.


Keywords Click a term to view the records with the same keyword
This object has the following keywords:
Metalwork, Mirrors, Mirrors

Your current search criteria is: Objects is "Mirror (Round, Lion and Grapevine)".