More than 300 demonstrating students were arrested 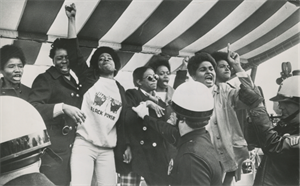 Commentary
NB: The Third World Liberation Front (TWLF) rose in 1968 as a coalition of various ethnic student groups on college campuses in California in response to the Eurocentric education and lack of diversity at their respective universities, most notably at San Francisco State College (now San Francisco State University) and University of California, Berkeley. The TWLF was instrumental in creating and establishing Ethnic Studies and other identity studies as majors in their respective schools and universities across the United States. At the tail end of the American Civil Rights Movement, the combined determination of the Latin American Student Organization (LASO), the Black Student Union (BSU), the Intercollegiate Chinese for Social Action (ICSA), the Mexican American Student Confederation, the Philippine American Collegiate Endeavor (PACE)(now known as the Pilipino American Collegiate Endeavor), La Raza, the Native American Students Union, and later the Asian American Political Alliance galvanized California and the rest of the nation with the first student strike, bringing to light the educational need for more perspectives within disciplines. The TWLF strikes for Ethnic Studies in California drew the attention of the universities' administrative leaders as well as the attention of the Governor of California Ronald Reagan. The student strikes for the establishment of these courses started in 1968 and lasted for several months. The establishment of the first College of Ethnic Studies at San Francisco State, the first Ethnic Studies Department at Berkeley, increased hiring of faculty of color, and a dedication to increase minority representation on college campuses are all resultants of the actions of the Third World Liberation Front.
Marks
With date stamp and newspaper caption with date stamp affixed to verso. CVL-CA-056
Medium
Vintage Associated Press wirephoto

Your current search criteria is: Objects is "More than 300 demonstrating students were arrested".