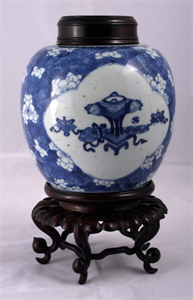 Commentary
Excerpt from communications with donor: "It was brought out of China by an amazing woman, Leo Spofford, as she was fleeing China at the
time of the Revolution. I met Leo in the 1950s when she was the executive director of GS Council executive that
encompassed my small town, Artesia New Mexico. I was quite active in Scouting at the time, and Leo also became
friends with my parents. Leo had earlier worked in China for an aid organization (I'm forgetting which right now); at
the time, as I recall, she was the sole support of herself and her disabled husband who was, I believe, in the
STates. Leo wrote detailed letters from China---and a friend of my mom, Betty Lamb, who read those papers
prepared a biographic sketch of Leo, also using interviews with her as I recall. I ended up with those papers and they
are now in special collections at Honnold Library. Several years ago several of Leo's letters were part of an great
exhibit at Honnold of letters by women who were working in China at the time of the REvolution--I think the others
were missionaries (Leo was with a secular group)
Leo gave me a vase that she brought from China as she was leaving under the pressures of the time. I am ready to
part with it and to find it a good and appropriate home. I wanted to see if it's something you'd like to consider, given
that Leo's papers are already in Claremont--and perhaps in the future some of her letters and the vase could be
paired somehow. I'll send you some images from my phone. You'll see I have the original padded, silk-lined box in
which she brought the vase from China. There are three pieces: the lid, the vase, and the pedestal. I have NO idea from when the vase date and whether it has much value beyond it's very interesting history of ownership and 'travel.'"


Additional Images Click an image to view a larger version

Your current search criteria is: Objects is "Blue and white lidded jar".