Kannon Reigen Ki No.18 of the Saikoku Pilgrimage Route 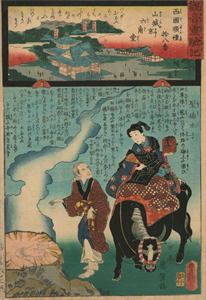 Credit Line: Purchased with funds from the Aoki Endowment for Japanese Arts and Cultures
Accession Number: 2021.1.13

Commentary
From the series, "Kannan Reigen Ki" (Miracles of Kannan). No. 18 of the Saikoku Pilgrimage Route.
Rokkakudo pavilion of Choho temple in Yamashiro Province.
Story of "Shotoku Taishiu. Prince Shotoku always carried a statue of Nyoirin Kannan Bodhisattva,
which was found floating around the ocean of Awaji island. While he was traveling, he met an elderly
. woman, who told him about an ancient "sugi" (Cryptomeria) tree, which was shrouded in purple cloud
every morning. Prince Shotoku build Rokkakudo pavilion using the lumber from the ancient tree and
enshrined the statue he was carrying.
This series is in the collections of The Museum of Fine Arts Boston, The British Museum, etc.
The Saigoku Kannan Pilgrimage is a pilgrimage of thirty-three Buddhist temples throughout the
Kansai region of Japan. In addition to the official thirty-three temples, there are the additional three
temples known as "bangai". The principal image in each temple is Kannan Bodhisattva.
The pilgrims traditionally wear white clothing, conical straw hats and carry walking sticks. They record
their progress with a prayer book (Nokyo-cho ), which the temple staff mark with red stamps and
Japanese calligraphy indicating the temple number, the temple name, and the specific name of the
Kannan image.
Some pilgrims receive the stamps and calligraphy on wall scrolls (for a decorative hanging) and on
their white coats (to be cremated in) as well.


Marks
Toyokuni. "Hiroshige" in the bottom right of the upper inset.
Medium
Woodblock print
Portfolio List Click a portfolio name to view all the objects in that portfolio
This object is a member of the following portfolios:

Your current search criteria is: Objects is "Kannon Reigen Ki No.18 of the Saikoku Pilgrimage Route".