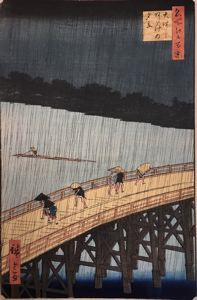 
Marks
Seals in upper right (4), and lower left (2).
Object Description
Color woodblock print with an image of figures crossing the Ohashi bridge in the rain.

Your current search criteria is: Objects is "One Hundred Famous Views of Edo: 52, Sudden Shower Over Shin-Ohashi Bridge ...".