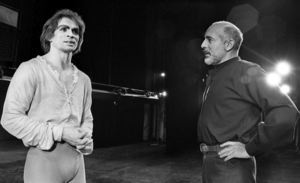 
Marks
The work is signed on the front (lower right, border) and bears the title âRudolph [sic] Nureyev and Jerome Robbins,â edition number 10/30, year of creation â1970,â and the word "London" on the back.
Object Description
Nureyev (in costume) is shown on the left, Robbins, on the right (arms akimbo), in conversation.
Keywords Click a term to view the records with the same keyword
This object has the following keywords:
Dancers, Males
Portfolio List Click a portfolio name to view all the objects in that portfolio
This object is a member of the following portfolios:

Your current search criteria is: Objects is "Nureyev and Jerome Robbins".