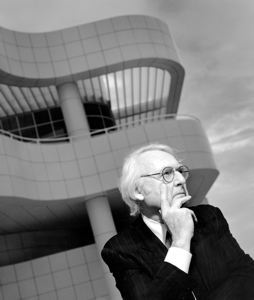 Commentary
American architect Richard Meier (1934â) is most widely known for his design of the 1997 Getty Center Complex in Brentwood. Meier had already received the highest honor for architecture in 1984, the Pritzker Prize, when he was commissioned to create the Gettyâs Brentwood campus. While Meier is also known for his designs for the Barcelona Museum of Contemporary Art and the High Museum of Art in Atlanta, he is framed against his most iconic work in this photograph. The structure of the Getty rises above Meierâs head as if growing from the ideas of the creative force pictured.


Marks
no marks
Object Description
Meier, depicted on an angle, stands before and beneath the curving forms of balconies at the Getty.
Keywords Click a term to view the records with the same keyword
This object has the following keywords:
Architecture, Gelatin silver print, Males
Portfolio List Click a portfolio name to view all the objects in that portfolio
This object is a member of the following portfolios:

Your current search criteria is: Objects is "Richard Meier at the Getty, Brentwood, CA".