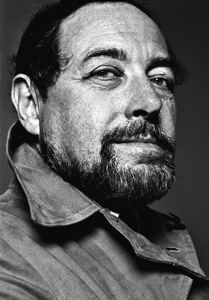 Commentary
Tennessee Williams (1911â1983) was an American playwright and novelist who would leave a lasting legacy on the stage. Williams came suddenly to public attention with the semi-autobiographical play, The Glass Menagerie in 1944. He would go on to write the play, Cat on a Hot Tin Roof (1955), adapted into a film starring Paul Newman, Elizabeth Taylor, and Burl Ives. Williamsâ most famous work, A Streetcar Named Desire (1947), has been praised as one of the finest plays of the 20th century. It received a Pulitzer Prize for Drama in 1948, and in 1951, after a successful run on Broadway with Marlon Brando and Jessica Tandy, it was also turned into a film. Marlon Brando reprised his starring role and was joined by Vivien Leigh, who had been in Sir Laurence Olivierâs London production of the play. Although raised in Mississippi and Missouri, Williams would relocate to New York City by the late thirties. He would remain there for most of his life, and was photographed there by Childers in 1973. Williamsâ intellectual person is captured in this photograph, as he peers out at the viewer over his raised collar.


Marks
no marks
Object Description
The photo reveals only the face of the writer and a small portion of his jacket, collar turned up. Williams gives the viewer a sidelong glance, a slight smile visible under his neatly trimmed beard.
Keywords Click a term to view the records with the same keyword
This object has the following keywords:
Males, Reading and Writing
Portfolio List Click a portfolio name to view all the objects in that portfolio
This object is a member of the following portfolios: