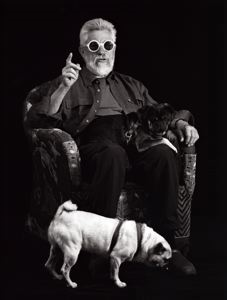 Commentary
American artist Ed Moses (1926â) is captured in all his eccentricities and innovations in this Childers shot. Born and raised in Los Angeles, and a 1958 graduate of the UCLA fine art program, Ed Moses would become a central figure of the postwar West Coast art scene alongside fellow Los Angeles artist Ed Ruscha. Rising to prominence with an exhibit at the esteemed Ferus Gallery in 1957, Moses would go on to have a career filled with reinvention and experimentation. Moses relocated to New York for less than a year. While in New York, Moses became acquainted with artists Mark Rothko and Willem de Kooning before returning to Los Angeles. Moses is caught here with his hand raised, apparently mid-thought at his pugs lounge around him.


Marks
The work is signed on the front (lower right, border) and bears the title âEd Moses,â location âVenice Calif.,â edition number 10/25, and the word âinkjetâ on the back.
Object Description
James Galanos is depicted sitting in a chair, with a pug on the floor before him.
Keywords Click a term to view the records with the same keyword
This object has the following keywords:
Artists and Craftsmen, Gelatin silver print, Males
Portfolio List Click a portfolio name to view all the objects in that portfolio
This object is a member of the following portfolios:

Your current search criteria is: Objects is "Ed Moses in his studio, Venice, CA".