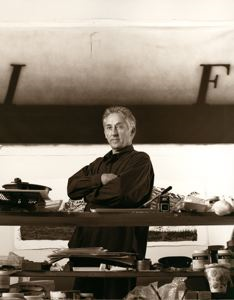 Commentary
Edward âEdâ Ruscha (1937â) lived most of his youth in Oklahoma, displaying early proclivities for drawing and painting, before relocating to Los Angeles to study at the California Institute of the Arts. Ruscha built up a network of colleagues and associated with the Ferus Gallery in Los Angeles during the 1960s, going on to teach intermittently at UCLA and work as a layout designer. His art would achieve widespread acclaim by the 1970s, with connections to the Pop Art movement and the Beat Generation. Like his contemporaries, Barbara Kruger and Jenny Holzer, Ruscha would distinctively begin to use entire words and phrases within his work. Ruscha is photographed here in his Culver City studio.


Marks
no marks
Object Description
Ruscha stands, arms crossed, gazing at the viewer, in his studio. A large, uppercase letter, "F," is to the right.
Keywords Click a term to view the records with the same keyword
This object has the following keywords:
Artists and Craftsmen, Males
Portfolio List Click a portfolio name to view all the objects in that portfolio
This object is a member of the following portfolios:

Your current search criteria is: Objects is "Ed Ruscha, in his studio, Venice, CA".