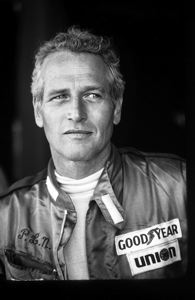 Commentary
Paul Newman (1925â2008) starred in two successful films released in 1969. He played the titular role of Butch Cassidy alongside Robert Redford in the Academy-award-winning film, Butch Cassidy and the Sundance Kid. Newman also starred with his wife Joanne Woodward and Natalie Woodâs husband Robert Wagner in the racecar drama, Winning. Newman appears in this photograph in Hollywood wearing a jacket bearing his initials that is similar to the clothing he wore racing. Winning sparked a lifelong love of automobile racing that would culminate in the colorblind Newman competing several times. In 2015, a documentary, Winning: The Racing Life of Paul Newman, explored the actorâs lasting fascination and side career in the racecar world. This photograph captures Newman as his burgeoning passion for racing takes hold.


Marks
The work is signed on the front (lower right, border) and bears the title âPaul Newman,â location âHollywood,â edition number 12/30, and year of creation â1969â on the back.
Object Description
Newman, from the chest up, wears a jacket with the Good Year logo.
Keywords Click a term to view the records with the same keyword
This object has the following keywords:
Actors and Actresses, Males, Performers
Portfolio List Click a portfolio name to view all the objects in that portfolio
This object is a member of the following portfolios:

Your current search criteria is: Objects is "Paul Newman".