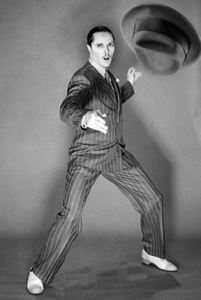 Commentary
American actor Christopher Walken (1943â) has appeared in a variety of roles on the stage and screen. After winning an Academy award for his role in The Deer Hunter (1978), Walken would go on to have roles in Batman Returns (1992), Pulp Fiction (1994), and Catch Me If You Can (2002), the last earning him another Academy award nomination. Walken also enjoyed a prolific career on stage, playing leads in the Shakespeare plays Romeo and Juliet, Macbeth, Hamlet, and Coriolanus. Childers photographed a young Walken here, at the very cusp of his acting career.


Marks
no marks
Object Description
Walken, wearing a suit and tie, placed in the center of the work, appears to have thrown his fedora at the viewer. The hat, appearing upside down as it seems to spiral toward the viewer, is visible at the upper righthand corner.
Keywords Click a term to view the records with the same keyword
This object has the following keywords:
Actors and Actresses, Males, Performers
Portfolio List Click a portfolio name to view all the objects in that portfolio
This object is a member of the following portfolios: