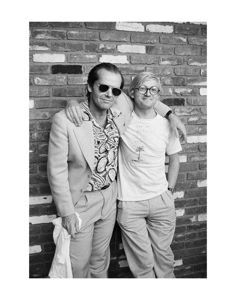 Commentary
Actor Jack Nicholson (1937â) and artist David Hockney (1937â) are seen here in a moment of creative camaraderie. Each man is highly recognized in his individual fieldâNicholson is the most nominated male actor in the Academyâs history, and Hockney has been awarded the ultimate British honor of the Order of Merit by Queen Elizabeth II. Despite the prestige of their respective careers, the already successful young Nicholson and Hockney are caught here in a casual instance of companionship and mutual respect.


Marks
The work is signed on the front (lower right, border) and bears the title âJack Nicholsen [sic] and David Hockney,â and location âHollywoodâ on the back.
Object Description
Jack Nicholson and David Hockney, arms slung over each other's shoulders, stand before a brick wall.
Keywords Click a term to view the records with the same keyword
This object has the following keywords:
Actors and Actresses, Artists and Craftsmen, Males, Performers, Portraits
Portfolio List Click a portfolio name to view all the objects in that portfolio
This object is a member of the following portfolios: