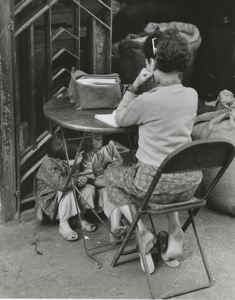 
Medium
vintage gelatin silver print
Keywords Click a term to view the records with the same keyword
This object has the following keywords:
Children
Portfolio List Click a portfolio name to view all the objects in that portfolio
This object is a member of the following portfolios:

Your current search criteria is: Objects is "Two little girls gossiping under a table, Hong Kong".