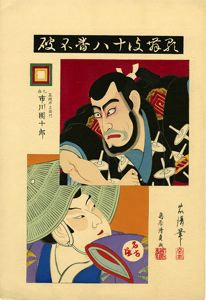 From "Kabuki Juhachi Ban": Ichikawa Danjuro IX is depicted in the role of Fuwa Banzaemon and Danjuro I as Nagoya Sanza in "Fuwa," one of the 18 famous Kabuki plays by the Ichikawa family.

Ichikawa Danjuro IX, is depicted in the upper right panel, playing the role of Fuwa Banzaemon in the kabuki play, "Fuwa." Pictured on the bottom wearing a sedge hat is the character Nagoya Sanza, Fuwa's rival. The Ichikawa family crest (mon) of nested squares is shown to the left of Danjuro, beneath which appears (9th Generation, Ichikawa Danjuro) and the character played (Fuwa Banzaemon.)

The Play Fuwa
Source: Kabuki Eighteen Traditional Dramas, Kawatake Toshio, Chronicle Books, 1885, p. 54.
"This story was first played in 1680 at the Inchimura-za in Edo with Ichikawa Danjuro I. During the cherry blossoms season, two warriors with their faces concealed in fantastic straw hats meet in Yoshiwara, the famous red-light district in Edo. They are Fuwa Banzaemon and Nagoya Sanza. Initially, Fuwa is a nice man but in due course he forgets his wife and his friend, Nagoya and seduces his courtesan lover.

In the true style of the Kabuki Eighteen, Fuwa later appear as Shoki (a powerful man who drives away the God of Plague) and fights off the goblins who try to kill him."

The Kabuki Eighteen
Source: Kabuki Encyclopedia, An English-Language Adaption of Kabuki Jiten, Samuel L. Leiter, Greenwood Press, 1979, p. 152.
"The Kabuki Eighteen," a collection of plays established by Ichikawa Danjuro VII, stresses the special aragoto acting art of the Danjuro line. In the Meiji period other acting families began to gather their most successful plays into similar collections. See the title page from the series The Kabuki Eighteen (Kabuki Juhachiban) for a list of the plays.


Medium
ink and colors on paper
Keywords Click a term to view the records with the same keyword
This object has the following keywords:
Kabuki, Meiji Period, Performers, Portraits
Portfolio List Click a portfolio name to view all the objects in that portfolio
This object is a member of the following portfolios: