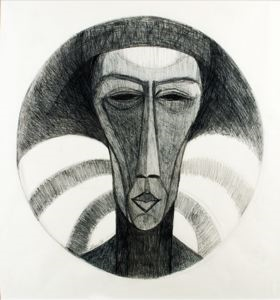 Commentary
The female figure wears a pillbox hat, which was inspired by a woman the artist used to see in church. She has a third eye below the hat, which signifies a spiritual presence. Shango is the god of war and fire in Nigeria. The double axe figure, which is an attribute of Shango, is echoed in the shape of the woman's hair. The curved bands that emanate from her shoulders echo the legs of a Senufo mask, which is believed to walk you into the future.


The influence of African religions, particularly, the Yoruba religion, is visible in Samella Lewisâs work, Sister Shango. At first glance, it strikes one as a curious portrait, perhaps a bit unusual in its intensity. Yet deeper inspection reveals layers of meaning unavailable to the uninitiated. The very name of the work hints at those depths of meaning. In an interview, Lewis discussed the piece: âIt has the Shango headdress that evolves from a pillbox hat, with the Senufo legsâyou see those little suggested things.ââ She then confirms that they are spider legs. âThatâs a Shango staff, so I call her Sister Shango. Sheâs from one of these churches and sheâs been dipping snuffâ¦.That may be too literal for some people, but Iâm putting it together, sort ofâ (âImage and Beliefâ 142-143).

Looking closely at the face, one notices the deeply etched lines, the lack of expressionâone might say, the wooden quality of the expression. The features are stylized, with triangles making up the mouth and nose. Most striking are the eyes, which are dark, with no hint of white or iris, no sense of movement. In fact, the face in its entirety radiates stillness. The neck, deeply shadowed, gives the viewer the sense that the face is floating. Is this a face or a mask? On that topic, Lewis commented, âThis is when I began to think about masks, and at one point I was using the mask to convert to contemporary African American formsâ (âImage and Beliefâ 142).

Why might she have done so? Lewis is speaking about Shango, god of justice and truth in the Yoruba religion, and commenting on the racial injustice she witnessed around her. This could be the face that hides the anger and hostility over that injustice by hardening into a mask.

In Sister Shango, we have an example of the mask hiding the deeper feelings of hostility, which Lewis has said require purification (âImage and Beliefâ 112), bringing the image into the realm of ritual. Lewis has given us yet another clue. She said that the arched forms to the right and left of the face indicate Senufo legs (and she indicated that these were spider legs). She also explained it was a Shango staff. The Senufu people live in CÃ´te dâIvoire, Ghana, Burkina Faso and in the south of Mali (Senufo). While I have not found evidence of the Shango staff connected to Senufo and the spider, I have found it connected to the Ashanti people, who also live in Ghana. Speakers carry staffs that are decorated with creatures that exemplify wisdom in speaking. One of those creatures is a spider (Peek). I wonder if Lewis may not have used this symbol due to the fame of Anansi, subject of stories and teller of stories extraordinaire (Peek). Anansi was a trickster as well: the energy of the trickster aligns with the multipleâand perhaps not all socially acceptableâmessages Lewis is communicating through her work. If so, she has chosen well.


Marks
Lower left: artist's signature and year
Medium
pencil on paper
Keywords Click a term to view the records with the same keyword
This object has the following keywords:
Alchemy and Mysticism, Drawings and Pastels, Females
Portfolio List Click a portfolio name to view all the objects in that portfolio
This object is a member of the following portfolios:

Your current search criteria is: Keyword is "LA" and [Objects]Period is "Contemporary 1946-present".