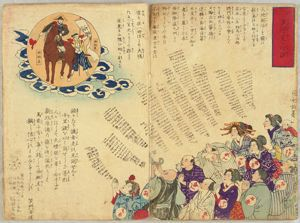 Credit Line: Purchased with funds from the Aoki Endowment for Japanese Arts and Cultures
Accession Number: 2014.1.38

Commentary
Baido Kunimasa, "Curious Southwestern Stories of Kagoshima Prefecture," The "Saigo Star"
Toward the end of the Satsuma Rebellion, an unfamiliar red star shone in the night sky, and rumors circulated that the star must be an incarnation of Saigo Takamori, who was leading the rebellion. One of the stories went that with the help of a telescope was that you could see Saigo himself within the star. The controversy culminated to the point that newspapers had to report that the star was simply Mars appearing close to Earth.


"Ryukosei no Chinsetsu" (The Strange Story about the Comet): A newspaper reported, "A bright star has appeared around 8 o'clock every night since early this month. The rumor was that when it was seen by a telescope, one could see the figure of Saigo Takamori in the official general uniform riding on a horse with the flag 'Shinsei Kotoku' (New Government, Great Virtue)."

Re the white banner:

As in many of the prints portraying the Rebellion the white banner carrying the slogan "Shinsei kotoku" (New Government rich in virtue) is prominently featured. The historian Mark Ravina points out that this slogan never appeared on Saig?'s battle pennants, being wholly created by journalists and artists "covering" the rebellion.2


Marks
The signature reads, "Kunitoshi gisho".
Medium
ink and colors on paper
Keywords Click a term to view the records with the same keyword
This object has the following keywords:
Meiji Period
Portfolio List Click a portfolio name to view all the objects in that portfolio
This object is a member of the following portfolios:

Your current search criteria is: Keyword is "JR".