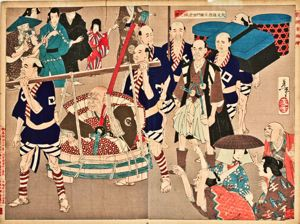 Commentary
Okubo Hikozaemon, or Tadataka (1560-1639), became perhaps the most popular member of the samurai class during his lifetime.

The eighth son of Okubo Tadakazu, Hikozaemon never attained the great status of his elder brothers, two of whom became daimyo while he was still a boy. In 1575, at the age of 15, he fought bravely in the battle of Nagashino, after which he was engaged by Tokugawa Ieyasu. He fought his last battles in the 1614 Winter and 1615 Summer campaigns at Osaka Castle, being made a commander of a company of spearmen at the former, and thereby a direct retainer of the shogun with the relatively low income of 1000 koku of rice. Ieyasu placed great reliance on him. It is popularly believed that the shogun left an instruction in his will saying that he forgave Okubo his insolence and stubbornness, and that future daimyo should consult him over any doubts or divisions. Okubo is said later said to have been humorously refered to as "The Office of Government Opinion." He endeared himself through his writings, notably the Mikawa monogatari (Tale of Mikawa), written for the private moral guidance of his family. But the book was secretly copied and distributed among the samurai and townsmen. It records the rise to power of the Tokugawa and the role that his own Mikawa clan played in the process. He instructs his successors not to respect Iemitsu too much, since he would order them to commit suicide over the slightest fault. His behavior was both direct and eccentric, but he always supported those in reduced circumstances. On one occasion, it is said, since those below the rank of direct vassal to the shogun (hatamoto) were prohibited from riding in palanquins, which he thought unfair to people with disabilities, he had himself carried to Edo Castle in a large washtub.


Medium
ink on paper
Keywords Click a term to view the records with the same keyword
This object has the following keywords:
Japanese Art, Japanese History, Kabuki
Portfolio List Click a portfolio name to view all the objects in that portfolio
This object is a member of the following portfolios:

Your current search criteria is: Objects is "Okubo Hikozaemon Being Carried to Edo Castle".