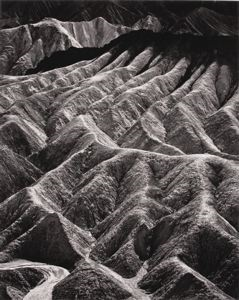 Commentary
Ansel Adams is greatly indebted to the modernist movement of the early 20th century and he was even somewhat contemptuous of his predecessorsâ photographic style known as Pictorialism He rejected its symbolic content and blurred forms. Despite this stance, he clung to 18th century romantic ideas of individualism and glorified nature above all else. A passionate environmentalist, Adams sought to depict nature as transcendental and majestic. In âZabriskie Point,â he focuses on intensity and monumentalism. Because they run parallel to each other, the mountains in the foreground lead the eye toward a shadow in the background, which falls horizontally across them. The shadow sharply contrasts with lighter mountains farther in the distance. Adamsâs mastery of light and composition encourages captivation with the scale and beauty of the landscape. The image also gives the viewer the suggestion of the infiniteâthe frame is filled with mountains, leaving no sense of where they end or begin.


Marks
This work bears the signature of the artist in pencil at the lower right, directly beneath the photo.
Medium
gelatin silver print
Keywords Click a term to view the records with the same keyword
This object has the following keywords:
Desert, Landscapes, Nature, Photography
Portfolio List Click a portfolio name to view all the objects in that portfolio
This object is a member of the following portfolios: