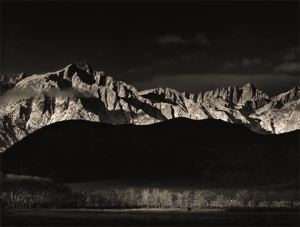 Commentary
Ansel Adamsâ iconic photography has shaped and influenced Americaâs idea of the wilderness. His appreciation of nature started early, in his native San Francisco, but it was his frequent visits to Yosemite as an adolescent that fostered the love of the wilderness that led to his interest in photography. Although Adams is most well known as a photographer, he was also an avid activist for the environment. His participation in the Sierra Club as a young adult gave him the opportunity to publish his first photographs and writings in the clubâs 1922 Bulletin. In 1928, his first one-man exhibition was held in the Sierra Clubâs San Francisco headquarters. Adams moved away from the âpictorialâ style favored in the 1920s and pursued âstraightâ photography instead. In straight photography, clarity of the lens is emphasized, and there is no sense of the work having been manipulated in the camera or dark room. To achieve this effect, Adams developed the famous, and highly complex, âzone systemâ of controlling and relating exposure and development. This enabled him to visualize an image and then produce a photograph that matched that exact visualization. Adams was the original Photoshop master, decades before it even existed. This technique, along with the absence of humans as subjects and the dearth of humanity in his landscape photographs, is often critiqued as lacking realism. Yet, for almost a century, his images have inspired Americans to preserve the wilderness he loved to photograph.

Winter Sunrise, Sierra Nevada, from Lone Pine is a testament to Adamsâ technique. Adamsâ careful attention to natural light while shooting, as well as his work in the dark room, showcases a full spectrum of values and highlights. The stark white, jagged lines of the mountains stand out against the soft gray of the sky above and the rolling hills below. The foothills are blanketed by a dark shadow that Adams manipulated to remove any details. Below the hills is a line of trees with a sliver of a meadow in the foreground. A spotlight shines on a section of the meadow where a horse grazes. Behind the horse, the lighting highlights a row of leafless trees, turning them into glowing, bonelike beings. The varying light and dark composition endures as a mystical and enchanting image of the wilderness. Adams uses his visualization techniques to create a rich and powerful landscape scene that inspires the viewer to share in the beauty of nature.


Ansel Adams wanted to capture the motion of landscape in an inherently static medium, photography. Through patience alone, Adams could document timeâs passage across the natural world. This photograph was taken on the fifth morning that he shot the rising sun over the Sierra Nevada. Only on this fifth occasion did the lighting perfectly capture both the vast, mountainous landscape in the foreground while casting a beautiful shadow across the land in the foreground. The shadow blotting the hill out in the foreground makes the Sierra Nevada all the more tremendous. In Adamsâs photography, one can only admire the enduring qualities of nature by looking at the fleeting, here represented by a horse grazing in a spot of light, and a sunrise five mornings in the making.


Marks
This work bears the signature of the artist in pencil at the lower right, directly beneath the photo.
Medium
gelatin silver print
Keywords Click a term to view the records with the same keyword
This object has the following keywords:
Mountains, Nature, Photography
Portfolio List Click a portfolio name to view all the objects in that portfolio
This object is a member of the following portfolios:

Your current search criteria is: Objects is "Winter Sunrise, The Sierra Nevada, from Lone Pine, California".