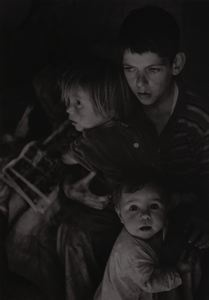 Commentary
The influence of documentary photographer Dorothea Lange on this photograph is obvious, and surprising given their contentious friendship. Adams described Lange as âan extraordinary phenomenon in photography,â and assisted her in her work. At the same time, Adams wrote to his friend Edward Weston, âI still believe there is a real social significance in a rockâa more important significance than in a line of unemployed,â a jab at Langeâs examinations of 1930s decay. By the 1940s, Adams turned from rocks and accepted Langeâs call for photography to engage with social issues. The eldest childâs look of worry, holding his younger sibling, along with the dark tones that Adams uses, imbue a haunting mood to poverty.

Early in his career, Ansel Adams clung to an apolitical approach to his artworkâhe believed that it was the artistâs job to abstain from social commentary and to produce âart for artâs sake.â This approach manifested itself in Adamsâs preference for nature photography and a focus on evoking the forcefulness of his landscapes. However, the Depression and the Second World War had a lasting effect on Adams and his contemporaries. As the social and economic climate in the United States worsened, the âart for artâs sakeâ ideology came under fire for being too distant and insular. As a result, Adams reexamined his political abstinence, realizing the potential he had to spread awareness of the intense poverty that the working class suffered. This imageâthree children, destitute and transientâsymbolizes a shift in Adamsâs social education and the expansion of his artistic philosophy.


Marks
This work bears the signature of the artist in pencil at the lower right, directly beneath the photo.
Medium
silver gelatin print
Keywords Click a term to view the records with the same keyword
This object has the following keywords:
Children, Photography, Portraits, Poverty
Portfolio List Click a portfolio name to view all the objects in that portfolio
This object is a member of the following portfolios: