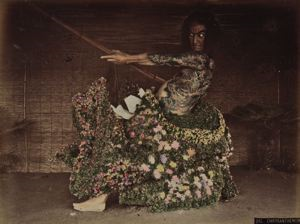 
Marks
In the lower right hand corner, the number 213 appears with the title.
Medium
hand-colored albumen print
Object Description
On facing pages in this album, "Fencing" depicts two men practicing martial arts in an outdoor setting and "Chrysanthemums" shows a statue of a samurai warrior made with blooming plants. The juxtaposition provides a humorous parallel. The samurai class that had dominated Japanese politics and society for centuries had been replaced in the 1870s by civilian government bureaucrats who were modernizing Japan to compete with European and American models. That hereditary profession of warriors was now obsolete and could be publicly mocked. But learning martial arts was still valued in Japan, especially in the 1890s, when nostalgia for the past resulted in a renewed interest in traditional skills and arts. Whether Kimbeiâs studio made the juxtaposition when assembling the album or the foreign customer deliberately chose the sequence of images cannot be determined, but the irony is evident. Bruce A. Coats Professor of Art History and Humanities
Keywords Click a term to view the records with the same keyword
This object has the following keywords:
Japanese Art, Japanese Customs, Japanese History, Photography, Soldiers and Warriors
Portfolio List Click a portfolio name to view all the objects in that portfolio
This object is a member of the following portfolios:

Your current search criteria is: Objects is "Chrysanthemums".