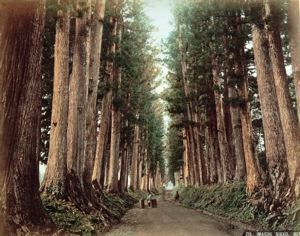 Essay: This image represents the relatively new use of photographic media in Japan during the end of the 19th century. Kimbei depicted a new kind of image of everyday Japanese life that marketed the idea of Japaneseness to a non-Japanese audience. He began to shift from attracting audiences of foreign residents who had a sense of Japanese culture, to audiences of foreign tourists who were interested in Japanese culture as an example of the exotic. The tall trees and nature display a less common Japanese setting of early photography, and in tourist imagery. Kimbei represents a more natural aspect of Japanese life in contrast to the previous images that focused on human subjects in city life.


Marks
This work bears the number, "751."
Medium
hand-colored albumen print
Object Description
Tall trees line both sides of a hard-packed dirt road that runs from the center of the foreground to the center of the midground, then drifts off into the distance. Some distance down the road, the viewer sees two figures. On the left, a man, holding a large, round woven hat, stands next to two tall wooden boxes. On the right, another figure sits in a rustic wagen. The two might be taking a short breather before continuing down the road.
Keywords Click a term to view the records with the same keyword
This object has the following keywords:
Forest, Japanese Art, Japanese History, Nature
Portfolio List Click a portfolio name to view all the objects in that portfolio
This object is a member of the following portfolios:

Your current search criteria is: Related to "Kimbei Studios".