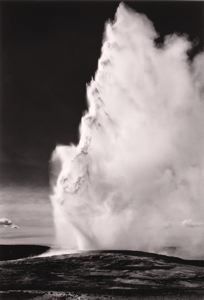 Commentary
In 1941, Ansel Adams was contracted by the Department of the Interior to create a photomural of natural landscapes for its building in Washington, DC. Adams had already shot a great deal of photographs when the project came to an end due to the onset of World War II. This photograph belongs to a series that Adams captured of Old Faithful Geyser during one of his visits to Yellowstone National Park. The plume of water consumes most of the frame as it erupts from the earth. The white water dwarfs the mountains in the background while reaching into the dark sky. The contrast between the water and background draws the viewerâs eye into the sulfuric mass and holds it there.


Marks
This work bears the signature of the artist in pencil at the lower right, directly beneath the photo.
Medium
silver gelatin print
Keywords Click a term to view the records with the same keyword
This object has the following keywords:
Landscapes, Nature
Portfolio List Click a portfolio name to view all the objects in that portfolio
This object is a member of the following portfolios: