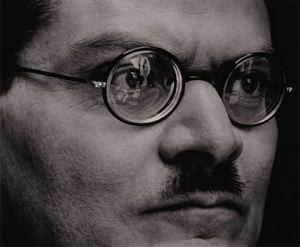 Commentary
Jose Clemente Orozco was one of Los Tres Grandes, the three Mexican muralists who revolutionized their nationâs art production during the early 20th century. Edward Weston, a friend of Ansel Adams, had met and befriended Orozco while traveling in Mexico, and he introduced him to Adams in New York. Here, the artist is a portrait of rigid resilience. The camera focuses on his furrowed brow, highlighted by the rim of his glasses. Orozcoâs life was one defined by the determined expression shown here: he lost his left hand at the age of 21, and then went on to create colossal murals, an artistic form requiring immense physical labor. Here his wound does not matter. One cannot see his missing arm, only his fierce personality, his glasses reflecting the New York cityscape, allowing us to see as the visions of an artist.


Marks
This work bears the signature of the artist in pencil at the lower right, directly beneath the photo.
Medium
silver gelatin print
Keywords Click a term to view the records with the same keyword
This object has the following keywords:
Artists and Craftsmen, Photography, Portraits
Portfolio List Click a portfolio name to view all the objects in that portfolio
This object is a member of the following portfolios: