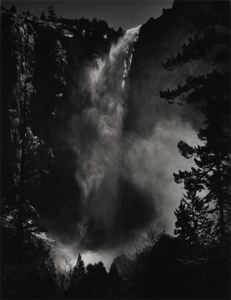 Commentary
Ansel Adamsâ photograph, Bridalveil Fall, Yosemite Valley, is a shining example of Adamsâ life long study of the majesty of nature. Adams spent his childhood in his birthplace, San Francisco. His solitary youth, educational struggles, and walks through the wilds of Golden Gate Park caused Adams to find joy within nature. By the 1920s, Adams was well on his way to realizing his talent in photography. This photograph is part of a special selection by Ansel Adams between 1978 and 1984 known as museum sets. Each set is unique, providing a look into Adamsâ inner thoughts. The viewer is invited to witness how Adams captures the serenity and power of nature.

Bridal Veilfall, Yosemite Valley, was photographed in 1927. This was a pivotal year for Adams because he began to pursue straight photography. Straight photography is the focus and precision of the lens so that the final print has no appearance of being manipulated in the camera or darkroom. This photo is a prime example of the straight photographic style with its sharp lines and contrasts between light and dark. The focus of the piece is the waterfall located at the center of the work. The water has an effervescent quality created by the gray tones against the shadows of the rocky cliff. The brilliant white of the water at the top of the piece is featured throughout the waterfall, guiding the viewerâs eye downward. Ansel Adams wrote to his wife of his time as a young man at Yosemite, ââ¦I find myself looking back on the Golden Days in Yosemite [ca. 1919-1923] with supreme envy. I think I came closer to really living then than at any other time in my life, because I was closer to elemental thingsâwas not so introspective, so damned sensitive, so infernally discriminative.â Adamsâ consciousness of the proximity of nature and his own sense of being part of the natural world are evident in this piece.
1Stillman, Andrea G. Yosemite and the High Sierra: Ansel Adams. Little, Brown and Company, 1994. Print
Shaina Raskin â15
Wilson Intern 2013

The waterfall, the cliff face, and the tree in the foreground create three slashes from the bottom to the top of the frame, communicating the sheer verticality of Bridalveil. Blotting out the sky, Yosemite dominates the viewer. And yet, there is an element of the fleeting: this precise cascade of mist will never appear again; the tree will one day fall; a waterfall can erode away mountains. In nature, everything is ephemeral, but through photography, Adams makes the most transient of experiences endure like the mountains of Yosemite. Taken when Adams was only twenty-five, interest in both the timeless and the temporary is clear from even this earliest work.
David Kuhio Ahia, PO â18
Getty Multicultural Undergraduate Intern

This photograph was one of many that marked Ansel Adamsâs foray into straight photography, a style that relied on sharpness and clarity of images--it was an aesthetic whose goal was to highlight the differences between the field of photography and other media. Adams has masterfully accomplished this in Bridalveil Fall. He emphasizes the movement of the waterfall by creating a stark contrast between it and the surrounding foliage, between light and dark. The eye is immediately drawn to the top of the waterfall, one of the lightest points in the photograph, and guided downwards. The mist from the waterfall continues the movement, however, because it forms a semicircle, which reconnects to the original body of water, creating an endless flow. Just 5 years after this photograph was taken Adams formed âGroup f/64â with five other California artists who also appreciated the straight photography aesthetic. The group named itself after the f/64 camera setting, which yielded the clear images that Adams and his group valued.
Laura Woods, SCR â18


Marks
This work bears the signature of the artist in pencil at the lower right, directly beneath the photo.
Medium
silver gelatin print
Keywords Click a term to view the records with the same keyword
This object has the following keywords:
Landscapes, Nature, Photography, Waterfalls
Portfolio List Click a portfolio name to view all the objects in that portfolio
This object is a member of the following portfolios: