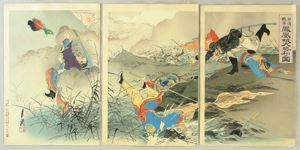 Credit Line: Purchased with funds from the Aoki Endowment for Japanese Arts and Cultures
Accession Number: 2012.1.17

Commentary
The following is an excerpt from an article by Dan McKee on artelino.com:

The very same printmakers, however, when the issue was not domestic policy but a foreign enemy, were quick to take the side of government and nation in creating propaganda prints of the Meiji government's foreign wars.

Kiyochika, for example, was the most popular and prolific designer of prints of the Sino-Japanese War (1894-95), which typically depicted the Chinese enemy as a primitive and colorful horde, and the outnumbered Japanese as solemn, fearless heroes who broke through their ranks regardless.


Marks
artist's seal
Medium
ink and colors on paper
Object Description
Scene of fierce fighting at Fenghuangcheng Castle (Ho-o-jo in Japanese) in Sino-Japanese War.
Keywords Click a term to view the records with the same keyword
This object has the following keywords:
Sino-Japanese War (1894-1895), War and Conflict
Portfolio List Click a portfolio name to view all the objects in that portfolio
This object is a member of the following portfolios:

Your current search criteria is: Objects is "Sino-Japanese War - Battle of Fenghuangecheng Castle".