Skiffs at the Dock 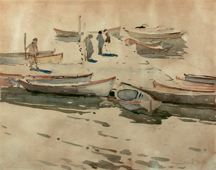 Commentary
It is impossible to speak of the history of the art department at Scripps or even the history of postwar art in Southern California without mentioning the name of Millard Sheets. A native of Pomona valley, he made an indelible impact in the region as a painter, architect, muralist, educator and director. Sheets came to teach at Scripps in 1932 where he built up the art department, attracting a faculty that spurred Claremont into a lively arts center. By the 1930s, he emerged as a leader of the âCalifornia Styleâ of watercolor.

This watercolor, "Skiffs at the Dock," from 1927, reveals his early focus on landscape subjects, as he painted the beaches, mountains and deserts surrounding Los Angeles. What is remarkable is the transparency and clarity of light that Sheets is able to capture. The vibrancy of these early watercolors was due in part to his practice of the Impressionist plein-air method.

Millard Sheetsâwho would serve as a professor at Scripps College from 1932 to 1955âpainted coastal California many times in his career, evoking a certain lazy and calm mood. California of the 1920s was seen as a paradise of resort towns and a young Hollywood, and while Sheets constructs this paradise, he downplays the glamour of the new California in favor of the simple and elegant. The vibrant local flavor of these watercolors comes from Sheetsâs pleinâair method of painting, adopted from the Impressionists, in which he would paint these scenes not in the confines of a studio but on the docks and in the parks that he depicted.


Marks
Pencil signed, lower right. There are penciled notes in the upper right margin and lower left margin.
Medium
watercolor and pencil on paper
Keywords Click a term to view the records with the same keyword
This object has the following keywords:
Boats, Modern 20th century, Western Paintings

Your current search criteria is: Objects is "Skiffs at the Dock".