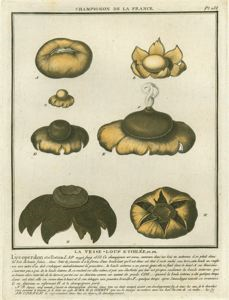 Translation of text: "â¦ In autumn, this mushroom is rather common in our forests of tall trees. During the early stage, it is in the shape of a ball. While in this stage, it remains hidden underground. This enclosed ball thus avoids dustâ¦ At the top in figure A, the ball has thick walls and is splitting itself. In B, the divisions spread more and more. CDE, they curl over on themselves, and by elasticity, they lift the internal ball. The internal ball is lifted from the earth and rests on the divisions, as if on many feet. F, when the internal ball has been in this stage for awhile, it bursts at the top and emits a brownish dust. G, after awihle the wrapping cracks. H, the divisions close again. And the mushroom dies.

For five years, I have seen this mushroom drawn in all its stages except for before developmement, in figure A. All these years I searched without being able to find it. It is owed to the zeal of Mademoiselle M de Golmpy who sent me into nature with a nice sketch... Figures A, B, C, D, E, F, G, H represent the mushroom in all its stages of development."


Keywords Click a term to view the records with the same keyword
This object has the following keywords:
18th century, Nature, Plants (flora), Science and Technology
Portfolio List Click a portfolio name to view all the objects in that portfolio
This object is a member of the following portfolios: