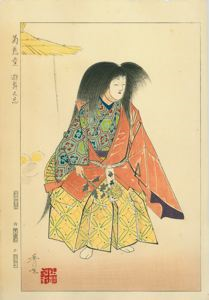 Commentary
A Chinese imperial official has been ordered to find the fountain of youth, and encounters the young boy Jido who reveals that long ago he was banished to the mountains by his king for having violated palace rules. However, when Jido wrote words of the Buddhist Lotus Sutra on chrysanthemum petals to float in a stream, the flower created an elixir of immortality. In this print, Jido dances outside his rustic hut holding a chrysanthemum branch while offering prayers for the Chinese Emperorâs long life.
Marks
Artist's seal; signed "Hideyo".
Object Description
Color woodblock print from the series "Twelve Months of Noh Pictures" (Juni-kagetsu Noh ga Suri). This series was made by Matsuno Sofu's six original designs plus six designs by his son, Hideyo. The noh play "Kikujido" is also known by the name "Makura jido" (Jido and the Pillow).
Publisher
Publisher: Unsodo
Carver: Nagashima
Printer: Shinmi
Keywords Click a term to view the records with the same keyword
This object has the following keywords:
Actors and Actresses, Noh, Plays and Theatre, Showa Period
Portfolio List Click a portfolio name to view all the objects in that portfolio
This object is a member of the following portfolios: