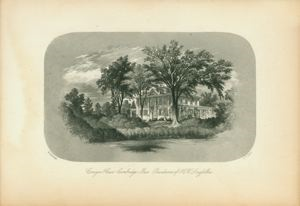 Object Description
Print engraved by S.V. Hunt from a painting by H. Billings, created for the book Homes of American Authors, published in 1853 by G.P. Putnam & Co., New York. Shown here is Craigie House, the residence of American poet Henry Wadsworth Longfellow (1807-1882). Craigie House already had a distinguished history before Longfellow rented out rooms in 1837 as a young professor at Harvard; the house had had the honor of billeting General George Washington during the Battle of Bunker Hill. When Longfellow married Frances Appleton, his father-in-law purchased Craigie House as a wedding present for the couple, where Longfellow lived the rest of his life.

From Homes of American Authors:
"One calm afternoon in the summer of 1837 a young man passed down the elm-shaded walk that separated the old Craigie house, in Cambridge, from the high road. Reaching the door, he paused to observe the huge, old-fashioned brass knocker, and the quaint handle,-relics, evidently, of an epoch of colonial state. To his mind, however, the house and these signs of its age, were not interesting from the romance of antiquity alone, but from their associationwith the early days of our revolution, when General Washington, after the battle of Bunker Hill, had his headquarters in the mansion."


Keywords Click a term to view the records with the same keyword
This object has the following keywords:
Houses, Trees
Portfolio List Click a portfolio name to view all the objects in that portfolio
This object is a member of the following portfolios: