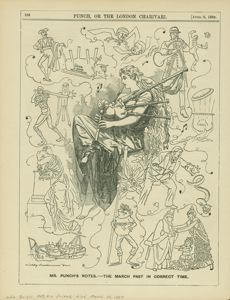 Marks
Handwritten note in lower left by Werner L. Janney: "John Bright, MP, + a Friend, died March 27, 1889"
Object Description
Cartoon from page 158 of the April 6, 1889 issue of Punch, or The London Charivari. Center picture shows a woman (most likely Britannia) playing bagpipes; cartoon representations of recent events surround her. On the left side, a cartoon shows a classical figure weeping over the tomb of John Bright, a Quaker who served in the British Parliament as President of the Board of Trade (1868-1871) and Chancellor of the Duchy of Lancaster (1873-1874). He is famed as one of the great orators of his generation and for his participation int he Anti-Corn League.
Keywords Click a term to view the records with the same keyword
This object has the following keywords:
19th century, Aristocrats and Public Officials, Law and Politics, Musicians
Portfolio List Click a portfolio name to view all the objects in that portfolio
This object is a member of the following portfolios:

Your current search criteria is: Keyword is "OA".