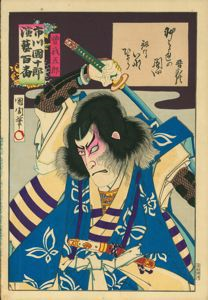 "Danjuro IX is playing the role of Soga Goro (1174-1193), the younger of two brothers who sought revenge for the killing of their father. Kabuki plays about the Soga Brothers were very popular, especially at New Years time, and actors bearing the Danjuro name were intimately associated with those roles for over 300 years. The overtly violent actions of characters in the play became an important part of the Danjuro acting style called aragoto / rough style."
(ML, student in 2010 seminar ARHI154 Japanese Prints)

One Hundred Kabuki Roles of Ichikawa Danjuro: Priest Mongaku
2009.1.87
Portfolio List Click a portfolio name to view all the objects in that portfolio
This object is a member of the following portfolios: