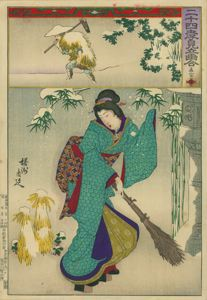 Credit Line: Purchased with funds from the Aoki Endowment for Japanese Arts and Cultures
Accession Number: 2008.1.64

Object Description
Print No. 23 in Chikanobu's series, "Juxtaposed Pictures of Twenty-four Paragons of Filial Piety." In the upper panel, Chikanobu illustrates a scene from the story of Meng Zong, who went out in the dead of winter to look for bamboo shoots for his ailing mother. Amidst the snow and frost, he saw no sign of the young shoots, but he refused to return empty-handed. Without bamboo-broth medicine, his mother would surely die. Thinking of his poor, sick mother, Meng Zong began to cry, and his tears fell into the icy earth. Suddenly, he tripped over a mound of earth, and when he brushed aside the dirt, he discovered a bed of bamboo shoots. Taking them home, he prepared the medicine for his mother and she was soon cured. The neighbors proclaimed it a miracle, saying that it was Meng Zong's tears and devotion that brought forth the fresh shoots that usually only grow in the warm months. From that day forward, bamboo shoots were available year-round.

Chikanobu borrows the imagery from this story and reimagines a scene where a young woman in a bright kimono sweeps the snow by a bamboo stand.


Keywords Click a term to view the records with the same keyword
This object has the following keywords:
1886-1890, Filial Piety, People
Portfolio List Click a portfolio name to view all the objects in that portfolio
This object is a member of the following portfolios:

Your current search criteria is: Objects is "Juxtaposed Pictures of 24 Paragons of Filial Piety: No. 23, Meng Zong (Mousou)".