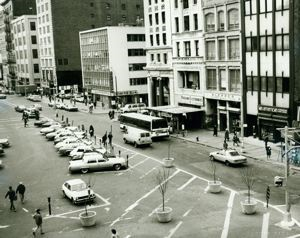 Commentary
Andy Warholâs painted portraits of celebrities Marilyn Monroe, Jacqueline Kennedy, and Elizabeth Taylor are well known, but less familiar are his photographic portraits of New York City. During the 1970s and 1980s, Warhol shot hundreds of pictures of Manhattan. He took some at the clubs he frequented, in particular, nearby Maxâs Kansas City and Studio 54, where he photographed such stars as Mick Jagger and Jerry Hall. Warhol also took pictures of New York architecture and streets, including this view of Union Square. A landmark intersection in New York, Union Square got its name in the 19th century from the union of Broadway and Fourth Avenue. In the spring of 1968, Warhol moved from a loft on East 47th Street to a loft that took up the entire sixth floor of 33 Union Square. Warholâs view is personal; he ignores the 1856 equestrian statue of George Washington in the squareâs center or the crowds who cross it, as they emerge from the subway below the street. Instead, Warhol looks at an angle down the west side of the square, which was the view from his studio window. âAndy loved Union Square,â said Pat Hackett who edited Andy Warholâs Diaries. This photograph was part of his visual diary of everyday life in his New York neighborhood. Mary MacNaughton Associate Professor of Art History


[Wall text from Art Pix #1: Streetview: A Spectrum in Black and White]
"With its rigid geometry, bright palette, and sharp focus, this image fits within Warholâs clean, pop aesthetic. The photographâs structured composition is at the heart of its strength. Indeed, Warhol emphasizes the cityâs geometry by composing his image around a diagonal street, from which buildings and parking spaces seem to fan out in chevrons. Most importantly, however, Union Square documents the way that people navigate the cityâs geometryâsometimes walking straight along sidewalks, other times forging their own paths."
(Tara Contractor SC '13, Academic Year Wilson Intern, 2010-2011)


Keywords Click a term to view the records with the same keyword
This object has the following keywords:
Cities, Urban
Portfolio List Click a portfolio name to view all the objects in that portfolio
This object is a member of the following portfolios:

Your current search criteria is: Objects is "Union Square, Undated".