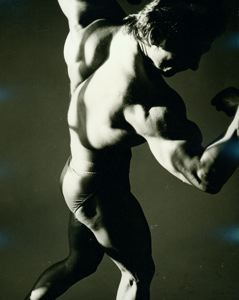 Commentary
Nude (Male) c. 1986 demonstrates a nuanced duality between classical and postmodern representations of the male body. In contrast with the late eighteenth-century aesthetic theories of German art historian Johann Joachim Winkelmann that champion the ancient or mythological hero, Andy Warhol redefines the hero in light of popular American culture. Taking full advantage of the idealizations of physical beauty that saturated American culture at this time, Warhol employs as the subject of this composition a male bodybuilder, complete with the iconic posing trunks. Yet, the figure of Nude (Male) is captured such that his image evokes a product of a classical, academic nude study. The title itself suggests an anatomical drawing session. However, Warhol created a series of photographs that, although bearing the same title, reveals perhaps shockingly diverse subject matter. Some borderline pornographic, Warholâs Nude (Male) photos are imbued with eroticism and the politics of sexuality. The use of dramatic lighting in this composition is paramount to the reading of this as a classical pastiche. This composition focuses on the âcalm grandeurâ of the form of the figureâs powerful body, the articulation of which is strengthened by the contrasts of light and shadow. His colossal left arm exceeds the limits of the frame while a shadowy striation intensifies the definition of his left shoulder blade. The flexed bicep is captured in total silhouette. This contour further highlights the strength of the individual. However, in comparison to so many of Warholâs portraits of celebrities, the individual of Nude (Male) is cast in an air of anonymity. By obscuring the personâs facial features in darkness, Warhol removes the possibility of the public recognizing who is represented. This exclusion leads only to greater focus on the body itself as an aesthetic subject rather than the individual. Lauren Ambielli, â14 Wilson Intern 2013


This Warhol photograph deviates somewhat from Warholâs usual oeuvre: an artist who is best known for his works on silkscreen, his photography tends to be Polaroid shots of friends, washed out by the bright flash and, for the most part, candid. This dramatic photograph of a bodybuilder is more serious than the usual Warhol photograph, its impact as bold as Warholâs silkscreens, with high-contrast lighting and a sculptural pose that recall glamour photos and classical forms. -Allyson Healey '14


Portfolio List Click a portfolio name to view all the objects in that portfolio
This object is a member of the following portfolios:

Your current search criteria is: Objects is "Nude Model (Male)".