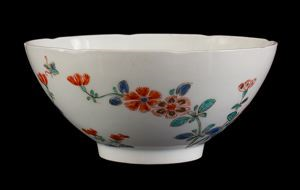 Commentary
This fine Kakiemon porcelain bowl is not only decorated with wild carnations, or pinks (Japanese: nadeshiko), but it is also lobed so that when seen from above, it is in the shape of an eight-petalled flower. Kakiemon porcelains were made from the mid-17th century in Arita in what is now Saga prefecture in Kyushu. Various styles of porcelains from the kilns of Arita were exported by Dutch traders to Europe and graced many palaces and stately homes there. Unlike the more rococo Imari ware porcelains, with their bold enameled and gold designs, Kakiemon wares feature more delicate designs in a restrained color palette of yellow, orange-red, green, blue and turquoise-green and enough empty space to allow the natural motifs to be fully appreciated.


Object Description
Several paper labels are glued onto the bowlâs side and bottom, documenting part of the objectâs long and notable history. The bowl was probably made in the 18th century at kilns located near Arita, an area on Kyushu Island in western Japan. In the 1590âs Japan had invaded Korea, capturing whole villages of potters who were then relocated to Kyushu and forced to create ceramics for Japanese military families. In the early 17th century kaolin clay, an essential component for the production of porcelain, was discovered in the Arita area, and in the mid 1640âs Chinese techniques of enamel overglaze were introduced, resulting in the mass production of delicate but durable polychromed porcelain pieces called kakiemon. Their intricate patterns and brilliant colors were applied in imitation of highly regarded Chinese imperial porcelains of the Ming and Qing dynasties, and during the 18th century Japanese kakiemon became an international phenomenon, desired worldwide from the Ottomon Empire to the American colonies.

The Scripps bowl, about 6 inches in diameter, was initially wheel thrown and then pressed into a mold where it was given an overall eight-lobe shaped rim and a raised spiral impression on the interior. Its creamy white glazed surface was decorated with red, green, blue and black enamels to depict sprigs of wild pinks and small butterflies. After several firings, gold accents were brushed onto the designs. If used in Japan, one might imagine some lightly vinegared vegetables or grilled eggplant slices with a ginger sauce placed in the bowl. However, such kakiemon became highly fashionable in Europe during the 18th century, and great quantities of Japanese porcelains were exported by Dutch traders to France and England, where they were prized possessions in palaces and country houses. Such a piece of export ware might have been used in Europe to serve fresh berries in cream. Inside the bowl at the bottom, a small blossom was painted to delight a diner as she finished her dessert.

The paper labels on the bowl indicate that by the early 20th century, this kakiemon piece had entered the collection of Sir Hercules Read, who became Keeper of British and Medieval Antiquities at the British Museum. As a young man, Read had helped catalogue the British Museumâs collection of ceramics from around the world, and he probably purchased the bowl for himself. A round label with a red cross and the text â1915 Loan Exhibition of Japanese Artâ indicates that the bowl was displayed in London as part of a fund raising effort for the Red Cross during World War I. Other labels on the bowlâs bottom reveal that the Scripps piece had been part of the âOriental Ceramic Socây 1956 Exhibânâ on loan from Richard de la Mare, one of the founders of the publishing house Faber & Faber and son of the famous English poet Walter de la Mare. Faber & Faber was noted for having produced numerous scholarly volumes on Oriental ceramics, including the important study Japanese Porcelain by Soame Jenyns.

Your current search criteria is: Objects is "Kakiemon Bowl".