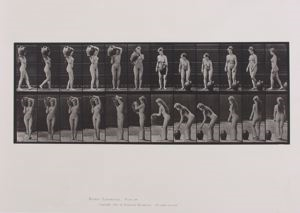 Commentary
Eadweard Muybridge rose to the forefront of photography in the late 19th century, when artists and scientists alike were coping with the significant shift in cultural perspective instilled by the developments of the Industrial Revolution. Vast improvements in technology, including popular inventions such as trains and automobiles, led to necessary changes in the perception of movement and speed. By the late 19th century, technological developments in the camera made it an ideal medium for this undertaking, and it soon led to crucial changes in science and art. The implications of Muybridgeâs work in the context of this visual-conceptual revolution have extended beyond his own time into ours. In the mid-1870s, Muybridge successfully photographed a horse in the midst of a full gallop. A single slide revealed that all four legs left the ground at the same time, a phenomenon previously only speculated upon and known as âunsupported transit.â In 1878, he captured the same horse in continuous fast motion from several angles, using 24 cameras. From then on, Muybridgeâs work focused on the anatomy of human and animal movement. He produced numerous series of photographs, including Motion Study: Woman and Jug, depicting people performing everyday tasks and acrobatics in the nude. The series allowed a more complete understanding of motion by breaking it down into many smaller parts. While Muybridge is unique among the photographers in this exhibition for his scientific approach to the medium, he also understood the power of aesthetics from his earlier days of landscape photography. The composition of Motion Study: Woman and Jug, with the curvaceous female figure, her flowing hair, and the vase she carries, heralds back to classical iconography, revealing Muybridgeâs knowledge and use of artistic tradition. Motion Study: Woman and Jug demonstrates the natural discipline and beauty of human motion, while additionally allowing insight into the science of the body and movement. Eadweard Muybridgeâs influence in both science and art is far-reaching. His invention of the zoopraxiscope, a device that projected sequential images drawn around the edge of a glass disc, producing the illusion of motion, continued the trajectory toward the development of motion pictures, and his photographic series inspired the work of artists such as Giacomo Balla (1871-1958) and Marcel Duchamp (1887-1968). Yet his primary legacy resides not in the concrete but in the intellectual and conceptual sphere; Eadweard Muybridgeâs images brought aesthetics and science together in the study of motion, and have significantly shaped the way Western society conceptualizes âevanescent realityâ in terms of action, space, and time. McKenzie Floyd â12 Wilson Intern 2011
Marks
Credit, date and plate number (226) printed in the margin.
Keywords Click a term to view the records with the same keyword
This object has the following keywords:
Females, Vessels
Portfolio List Click a portfolio name to view all the objects in that portfolio
This object is a member of the following portfolios:

Your current search criteria is: Keyword is "WM".