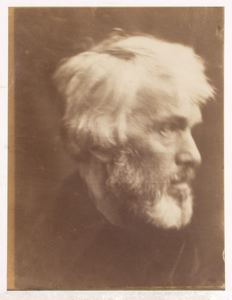 Commentary
Wrapped in a gauzy, otherworldly blur and staring fiercely out of the frame, the great Scottish intellectual Thomas Carlyle (1795-1881) appears not as an ordinary man, but as a champion of the mind. This portrayal was aptly chosen by Julia Margaret Cameron (1815-1879); one of Carlyle's most influential writings was his On Heroes, Hero-Worship, and the Heroic though History (1840), a work which synthesized his interests in history, religion, and literature into a singular "Great Man" theory of historical change. In this view, civilization shifts through the choices and actions of extraordinary individualsânot only those of kings and prophets, but also of intellectuals. Rather than simply record Carlyle's physical features, Cameron created an image that conveyed the importance of the man through his laudable intelligence.
While most portraits of the time were half- or full-length, Cameron tightly frames the photograph around Carlyle's head; this emphasizes Carlyle's prominence as a great thinker by depicting only the metaphorical seat of the intellect. Even his neck and shoulders, which are within the frame of the image, meld into the background. This creates a picture of a man who is completely ruled by the mind and not at all governed byâor, in this case, even possessingâa body. In contrast, his brightly illuminated hair becomes a disheveled halo that represents his incandescent, active mind. Placing him in profile hearkens back to depictions of Classical rulers and heroes, and reflects Cameron's own love of Classical art and stories.
Formally, Cameron used her distinctive soft focus to create an atmosphere that defied the mid-nineteenth century's fascination with the crystalline precision and mechanical nature of photography. Born of her early experiments, this blur became one of the essential elements of the visual language that Cameron crafted as she fought to pull photography away from its role as a scientific, documentary process and bring it into the realm of emotion, humanity, and the fine arts. This image of Carlyle, through both its framing and its soft focus, is a wonderful example of how Cameron used that visual language to depict her admiration for the heroic thinker.

***
In this profile portrait of the Scottish intellectual Thomas Carlyle, Cameron emphasizes the significance of mind over body through her focus on Carlyleâs head. His body melts seamlessly into the background, leaving the attention on Carlyleâs face. Cameron again demonstrates her desire to use photography as a channel to convey a personâs spirit rather than a tool to accurately record his features. Well known for his writing on hero worship, Carlyleâs significance to Cameron as a heroic and creative thinker in his own right is preserved through this emotional photograph.


Marks
Signed and inscribed in ink on the mount.
Object Description
Thomas Carlyle (1795-1881) is the celebrated Victorian era essayist, satirist, historian, and philosopher. Of Scottish birth, Carlyle was raised Calivinist, and then came to critique Christianity in his work while still maintaining his faith, contributing to his popularity during the Victorian era.
Keywords Click a term to view the records with the same keyword
This object has the following keywords:
Males
Portfolio List Click a portfolio name to view all the objects in that portfolio
This object is a member of the following portfolios: