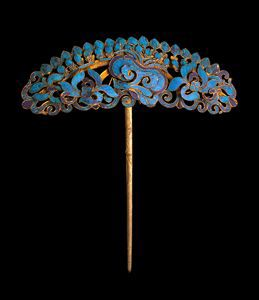 Commentary
For millennia, upper class Chinese women have worn hair pins, combs and other decorative items. From as early as the 9th century BC, they decorated them with kingfisher feathers in an art form (known as dian cui or tian tsui) that reached its peak in the Ming (1368-1644) and Qing (1644-1912) dynasties. Taken from several species of kingfishers from around China and Cambodia, these feathers are actually brown, but due to a phenomenon called structural coloration, they reflect light as a brilliant blue. Feathers were collected and cut into small sections and the glued onto frames made of copper and other metals. In this exquisite 19th century example, a copper base was formed into two lotus flowers representing purity and beauty flanking an auspicious fungus (lingzhi) representing long life.


Medium
Copper filigree with blue Kingfisher feathers.
Object Description
Pair of blue Kingfisher Chinese hair ornaments with floral imagery. Engraving on copper pin. The ornament was intended to quiver when worn.
Keywords Click a term to view the records with the same keyword
This object has the following keywords:
Jewelry, Jewelry, Metalwork
Additional Images Click an image to view a larger version

Your current search criteria is: Objects is "Kingfisher Hair Ornaments".